What to expect with Expected Goals

Or, in other words, what is behind the Expected Goals method?

Many football fans will already be familiar with the Expected Goals metric. The Expected Goals method is also being used more and more outside of analyses in television broadcasts. How the value is composed and what exactly is behind it you can find out here!

The Expected Goals method is an approach to objective game evaluation based on historical data. At first, that's pretty meaningless. To better understand the relevance of the metric, we need to dig a little deeper. First, let's take a look at the characteristics of football. Compared to other sports, soccer stands out for its low-scoring characteristics, as can be easily seen in the following graph.

The graph shows the average number of scores in a match in the respective sports. A score describes any action that increases the score of one's own team, i.e. a successful goal in soccer, handball and ice hockey. In basketball, this means 2- and 3-point shots and free throws, and in American football a touchdown, field goal, extra point or safety.

From the graph, the increased influence of chance in soccer can be deduced. A score achieved "by chance", such as a deflected goal kick, has a much more significant influence on the match result than in other sports. In soccer, trivial analyses often talk about unearned or earned victories. These terms are heard much less often in other sports, as chance plays a minor role due to much higher scores scored.

TheExpected Goals method cleans the game results from chance and objectively indicates how the game would have ended based on the value of the scored goal chances.

In the beginning, the Expected Goals metric was used only in insider forums and had little media attention. In 2001, the English company Opta Sports (now Stats Perform) was founded. The company set out to create a database that could be used as a basis for new approaches to analysis in football. Through the Expected Goals method, a way should be found to separate luck and chance from the teams' abilities. The idea is not to describe what actually happened, but what should have happened according to expectations. For this purpose, Opta Sports has documented goal chances over many years with respect to the position of the goal shot and the position of the defenders. Even today, the goal chances of games are documented and added to the constantly growing database.

The following figure represents the conditions considered in the Expected Goals method in the Bundesliga. 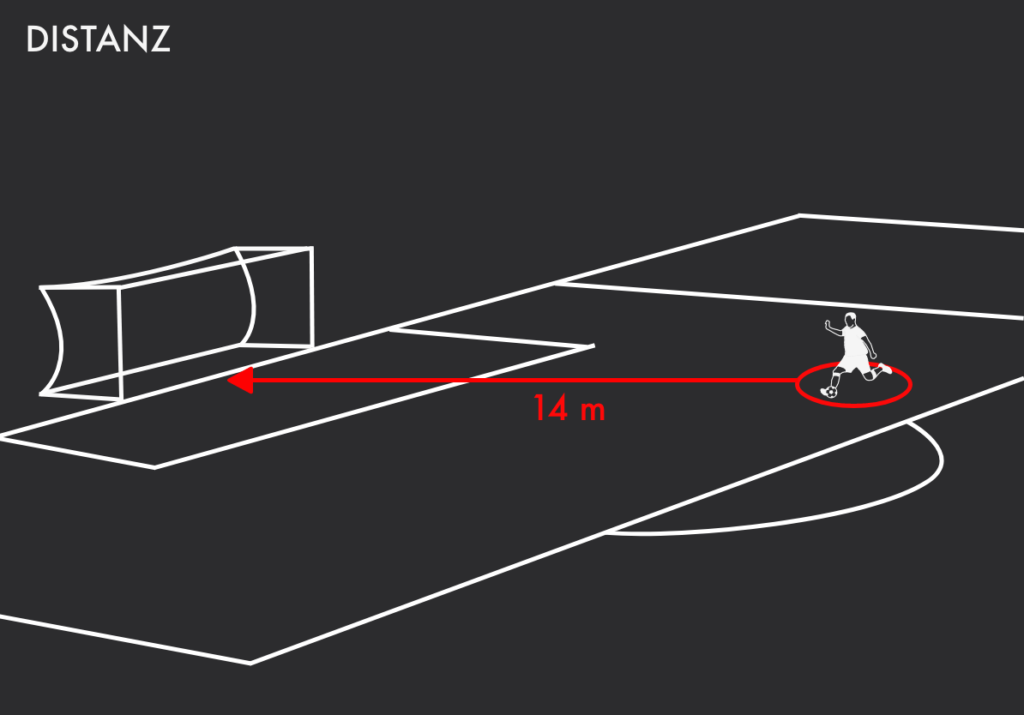 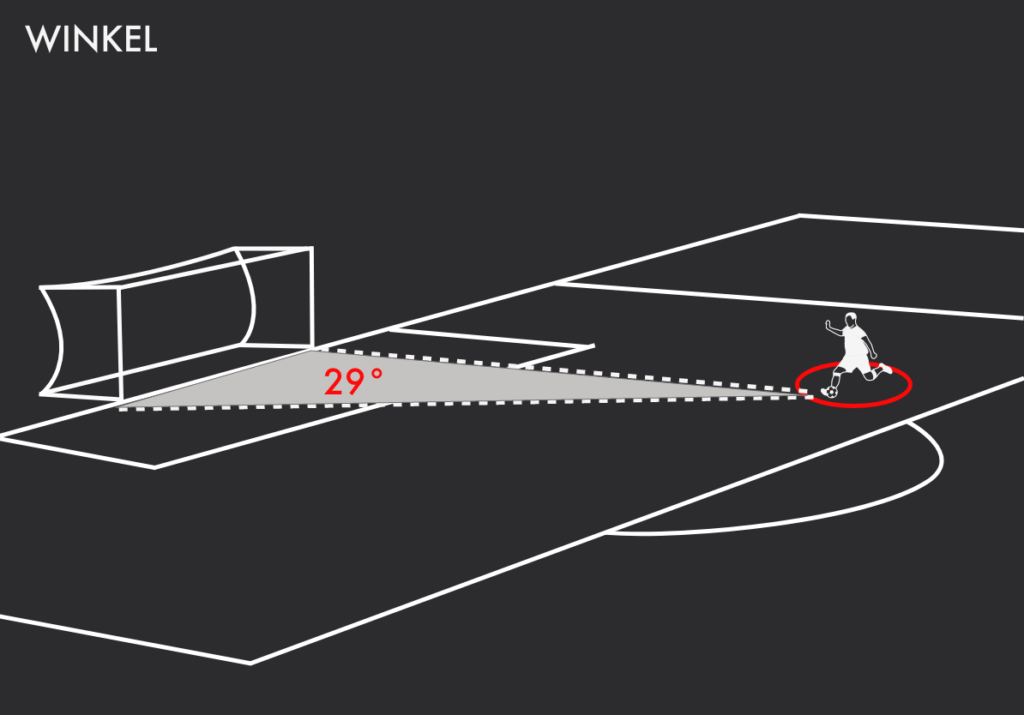 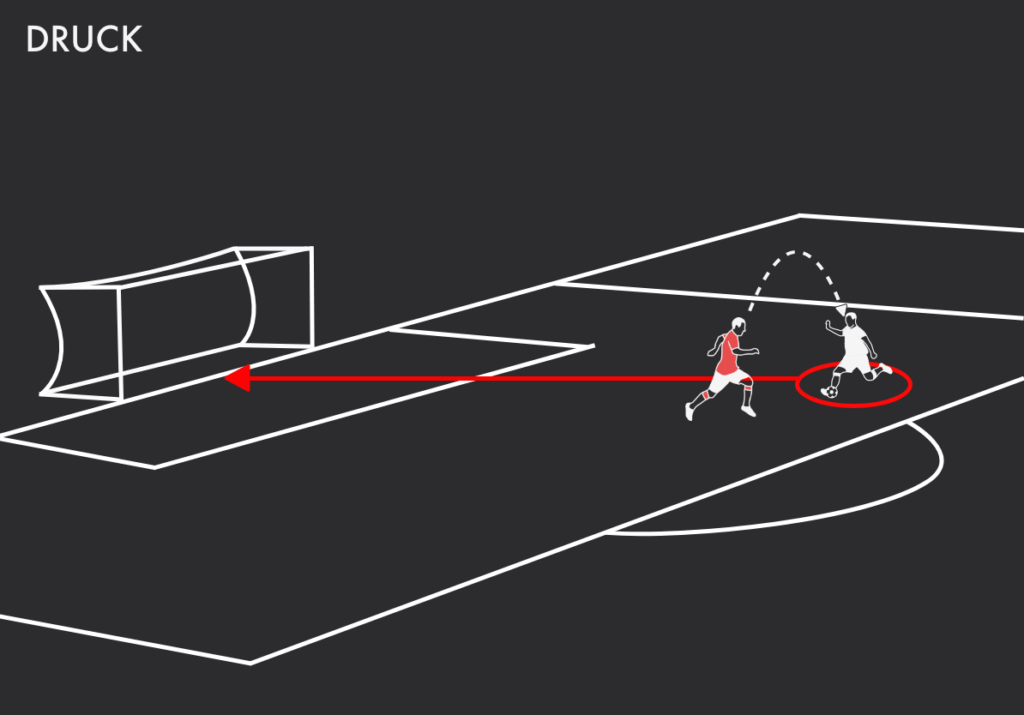 However, before the method became popular with clubs in the professional football business, it was mainly used by professional gamblers and betting syndicates. The founder of the sports statistics provider SmartOdds, Matthew Benham, was also the owner of the Brentford FC football club in the second English league. He introduced the Expected Goals method to professional football for the first time and used it specifically in scouting. The metric achieved its breakthrough in the 2017/18 season when it was presented for the first time on platforms such as Sky Sports and BBC.

For those who are familiar with the Moneyball concept or have seen the movie "Moneyball - The Art of Winning": The English club Brentford FC is the equivalent in soccer to the Oakland Athletics in baseball.

For all those who now only understand the station: These are clubs with financial capabilities far below the league average. Following the Moneyball concept, these clubs have tried to sign unknown talents by using new data-based approaches in scouting. Using objective statistical approaches such as the Expected Goals method, among others, they have signed young talents who have remained under the radar of the financially strong clubs and their scouts.

A look at Brentford FC's transfer record shows that the club has not been entirely unsuccessful with this approach. Over the last 6 years, the club has achieved a transfer surplus of almost 120 million euros, which is very, very unusual for English professional clubs.

The rectangles represent all scoring chances of both teams with the corresponding shot position. The green rectangles are goal chances that were converted into a goal in the game. The size of the rectangles is determined by the expected goals value. If you remember the quarterfinal first leg between FC Bayern and Paris Saint Germain, you might even recognize one or the other goal based on the positions and sizes of the rectangles. For example, the small green rectangle on the edge of the penalty area was Kylian Mbappé's goal when he tunneled Jerome Boateng off the dribble. The rectangle is relatively small because the Expected Goals value of a goal shot from this position with the defender directly in the line of fire is still very small at 0.11 xG. 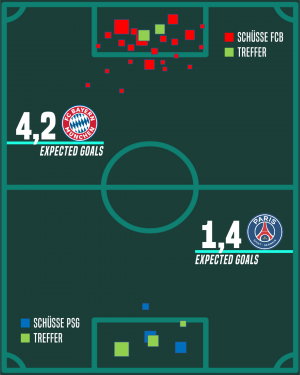 We first consider both the expected goals of the teams and the values of their opponents, the so-called expected goals against. In order to make the calculation as realistic as possible, we divide all values into certain shot zones in which the goal chances were created.

All readers with a slight allergy to math will have to stay strong for the next few lines, because to calculate the expected point yield we have to do some calculations.

First, the Expected Goals per Zone are calculated for both teams for this game. Using the league average, the defensive performances (xGA) of both teams can be put into perspective.

For both teams, the values for each shooting zone are as follows:

Although Dortmund has an average xG value of 2.12 over the season, the prediction for the match against Leipzig is only 1.26 goals. The reason for this is RB Leipzig's defensive performance, which is well above the league average, especially in Dortmund's strong shooting zones.

Based on the summed xG values from the upper table, the probabilities for the number of goals of both teams can now be calculated using the Poisson distribution:

If we add the individual probabilities, we get a probability of a win for Dortmund of 30.97%, a draw of 24.96% and a win for RB Leipzig of 43.94%. From the win probabilities we can now calculate the Expected Points (xP) of both teams for this match.

But enough with mathematics! The Expected Points indicator is used by major betting syndicates, among others, to create objective league tables. By the way, if you look at the objective table based on Expected Points, Bayern is not in first place. Instead, the table is headed by RB Leipzig, followed by BVB.

Players with a high outperformance value have effectively used their scoring opportunities and scored more goals than would be expected based on scoring chances. The player with the highest effectiveness in the top 5 European leagues is - who would have expected it - Robert Lewandowski. Lewandowski exceeded his Expected Goals value of 26.27 with 35 actual goals scored.

During the Champions League quarterfinal between FC Bayern and Paris Saint Germain, there was much discussion about the absence of Lewandowski and his replacement Eric Maxim Choupo-Mouting. Despite Choupo-Mouting's two goals, many agreed that with Lewandowski in the squad, Bayern would have scored at least one more goal, which would have been enough to reach the semifinals.

Compared to Robert Lewandowski, Choupo-Moting has under-performed his Expected Goals value by 1.1 goals this season. However, due to comparatively fewer minutes of action, this statistic is not particularly meaningful. But even over his entire career, the actual goals scored are lower than the total expected goals (-2.26). We will probably never know whether Lewandowski could have actually helped FC Bayern to progress in the Champions League. However, one thing is certain: Lewa's chance-taking this season is extremely good and may even help him break Gerd Müller's goal record from 1971/72 with 40 goals in one season.

If you always want to be up to date and stay informed about everything related to sports tech, you should definitely check out our social media channels.